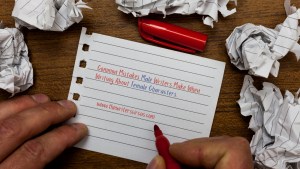 Writing someone unlike yourself is the most difficult thing a writer can do. It may seem daunting at first, especially if the risk of offense or your narrative feeling inauthentic, should the representation not ring true, worry you. But try not to worry. There are many ways to combat this. After you’ve finished writing, you can hire beta-readers or editors—both will really nit-pick. However, one thing you can do before you even put pen to paper (or start typing) is a little real-life research. Talk to people! For men writing women, talk to as many women as you can. Family members, friends, colleagues—anyone willing to spend a few minutes discussing anything that may particularly help you. What problems have they seen in books they’ve read before? What would they like to see?

Some of their answers may correspond with the following mistakes that some male writers make when writing female characters:

From the Manic Pixie Dream Girl to the Stubborn Badass, the Tomboy to the Dumb Blonde, female archetypes are just as common as any other. No matter their gender, every character should have a purpose otherwise they’ve no place in your story. Plus, a one-note character lacks that nuance readers crave—they’ve seen it all before, and want to see something new. For example, the dumb blonde is usually the antagonist, continues this harmful age-old stereotype, and is no longer comedic because it’s now a cliché. The Dumb Blonde also perpetuates this women-on-women hate plotline (especially in romance), which is definitely something we want to move forward from with the whole rivalry centralized around appearance.

If your characters are going to be enemies, it’s always more engaging for a reader if they’re enemies for a crucial reason—what’s at stake, did the antagonist do anything to them? Likewise, the Stubborn Badass has just become a stock character that many readers want to see challenged. Though it’s a female character in a position of strength, etc., other characters still unnecessarily sexualize them. Her skills are now just part of her allure and are seemingly always stoic. Sometimes, the Stubborn Badass can even become laughable because of just how obvious it is that she’s trying to smash stereotypes; to ‘not be like other girls’. This archetype of the Stubborn Badass may be an overcompensation for female characters historically being given no agency, presented as overly emotional, etc., but making this feminist statement obvious isn’t the best way to achieve balance—and this goes for writers of any gender.

In a Tumblr thread of women giving advice to male writers, I saw one woman mention that a female superhero would most likely want to wear a supportive bra and shapewear under her costume; another said she wondered how women in medieval and fantasy settings deal with body hair; somebody questioned why periods are always eluded. Due to this type of criticism, I think many writers have felt pressured to over-explain and have their characters over-share. For many readers, including this kind of information in your story is so mundane that it would probably bore or confuse them.

Why do we need to know? The truth is that we don’t. So don’t worry about including insignificant details with no tie to the plot just for the sake of realism. Women, like anyone else, read for escapism. We may not necessarily want to know about the character’s time of the month! Sometimes, logistics can actually interrupt the story’s flow, which is the worst thing, of course. Besides, scenes written with the day-to-day oversexualized or just completely wrong usually fall in the category of overzealous bad writing—which is a different issue.

When women see something inaccurate about their everyday life, it’s something we can have a giggle about. However, an abundance of mistakes can just become frustrating (for anyone). This comes back to just how important the real-life research I suggested you do is; since a quick Google search can easily fix these mistakes. The fact that you’re reading this now shows how conscious you are of getting the smaller details right; nonetheless, here’s a quick list of a few important things to keep in mind when you write about them:

Novelist Sally Koslow says: "By default, women have it easier than men when they attempt to craft characters of the opposite sex because our entire lives we've been reading vast amounts of literature written by men."

Whatever you do, try not to overthink the process. There’s no paint by numbers when it comes to characters, let alone representation of any group of people. We’re all unique! A quote that I think really sums this up is from George RR Martin. He was once asked how he’s able to write interesting female characters. He said: "Well, I've always believed women are people." That is what I encourage you to keep in mind! Just write a character. Prioritizing personality, motivation, and purpose is going to lead to an amazing character that readers can’t help but fall in love with—no matter their gender.

You covered a lot of very unique problems of understanding the female perspective on life, on more thing is her hormonal cycle which can effect every part of her being and thoughts.

Also as a woman she is seen in a different way than a male might not be able to relate too, the male and female brain and ways of thinking, men are logical and woman think and with emotions.

This is great stuff Millie! Have bookmarked for further reference as well, writing female characters can be quite difficult to get right.

No online members at the moment